deep within the heart (briefly apart)

. . . . she draws back the thick hotel curtain,  and looks out,  down at the city below her feet.   her reflection mixes in with the outside scenery.   and from the twelfth floor hotel room,  she can see the setting sun clearly.  the cityscape  could have easily been mistaken as  the same as the one before,  tall buildings,  stone,  brick  and  marbled.   little headlights pass by,   as the skycraped  lights grow bright.   quietly the television broadcasts the winning scores,  she turns and watches her favourite teams highlights.   slowly,  finding him again in thought.   turning off the rooms main light,  leaving the bedside table lamp glowing  softly off the wall,  illuminating the painting above the beds headboard.   flipping  the bathroom light switch,  the lights flicker on,   illuminates bright,  bathroom white.   the black and white checkered tile floor was cool on her toes,  as she got herself undressed.  as the bathroom quickly filled up with the warm steam,   the mirror fogged.   she wipes her hand across the mirror and the condensation slowly rolls downward.   and there,  in the clean mirrored image,  alone,  there she stood.  looking into her own eyes,  she could see the memory slowly coming back,  as there he was.   she could feel his hands softly rubbing her shoulders and arms.   behind her,  he softly kisses her neck.   but looking  back into the steamed mirror,   she stands there alone.   //   some two-thousand miles away,  give or take,  minus a thousand or two or plus a few hundred,   there he is.    walking into a house,   without her to come home to after a hard days work,    is a temporary scene.   but one that he could never get used to.    he runs  the razor trough the thick of a foam beard,  across his  face,  and  it shaves him clean.   wiping the mirror off  after every pass on his  face,   the  shower awaits.   looking in the mirror,   there he stands.    tired eyes,   and the stress in his face shines like a bright neon light.    this is not him,  and the man he  knows,   and the man he is seeing,   has  somehow temporarily checked out.    and there,   slowly,   she crawls into his mind,  and he  can feel her hands wiping away his stress,   as if she was there.   his eyes,   looking  back into the mirror,  he is standing alone with only the thought.   he dries himself off ,  dress  in his  nighttime attire,  and heads  for the kitchen.   the summer evening breeze dances though the kitchen window curtain,  and a soft distant sound of thunder dances across the corn field.    there,  as he eats his dinner for one,  he  flips through the channels.   darkened house ;  a soft  glow of the television.   where are you tonight?  //     she dries herself off,    as  she steps out of the shower.    wrapping a towel around herself  and another around her hair,    she calls  room service and orders herself  dinner.   quickly she dresses  in her nighttime attire.    as she answers the knock,   she signs her name and takes the food and heads to the bed.    she eats a bit between her e-mails and replies.   and her food slowly grows cold.   there,  she shuts the laptop,   and props herself up with all the pillows,   against the beds headboard.    flipping through the channels,  catching a glimpse of a movie,  or some sort of program,    the thought of him comes rushing back.    the thought  of one another usually floods each others minds when they are apart.    //    there,  on the couch,   his  food grows cold quickly,  as his  hunger fades away when she is gone.   the  program they  like to watch together  comes on,   and he  can feel her laying  there with him.   but tonight,  the thought of her keeps him company,   and her favourite decorative pillow props his  head up on the couch,  as he continues to watch the flipping of stations.   //  she falls asleep with the television on,  and dreams that he was with her,  holding her and waking up by her side.   but the sound of  the morning alarm proved it all a dream.   one more day of  meetings and deal making awaits,  and then she can go back home.    //   he falls asleep tonight with the television on,   and dreams that she came home a day early.    but the morning alarm proved it all to be a dream,   and with a lonely heart,  he gets ready for the day.   she comes home tomorrow morning.  //    the days apart  never moved as quickly as they wanted them too.  the short time apart always seemed to be too long.    and  everything  always reminded them of each other;    like a song,   or something on  television,   a sports game  or something that they’d come across at the store.    just one more  night,   and there,  they would be together again.    a restless night,   a wrestling match with the blankets,  and  the tossing and turning resembled a fish out of water.    six  a.m.,  this time,   same time,  same time zone,   and the sun peaks up from the horizon.    the strong smelling  coffee brews and looking at the time every five minutes became a bad habit.   he pours himself a cup as he tries to patiently wait for her arrival.   he takes his last sip of coffee and  pulls the curtain back from the kitchen window as he hears the tires roll onto the gravel.   there,  coming up the gravel drive,  she was home.    quickly setting his cup down and rushing out the laundry room door and down the back porch steps,   he watches her pull up and park.   as the dust rolls by,  they run to meet each other,   in the arms of each other,  they once again find  their happiness,   zero miles apart. . . . . .

enjoy poetry about life, emotion and everything in between. it's real and true. - please read and enjoy! - bgw View all posts by bradford graham west 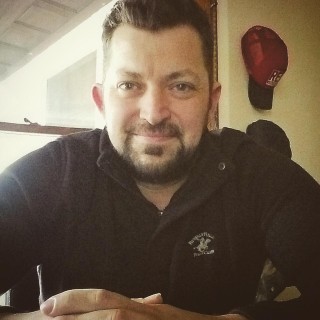 enjoy poetry about life, emotion and everything in between. it's real and true. - please read and enjoy! - bgw